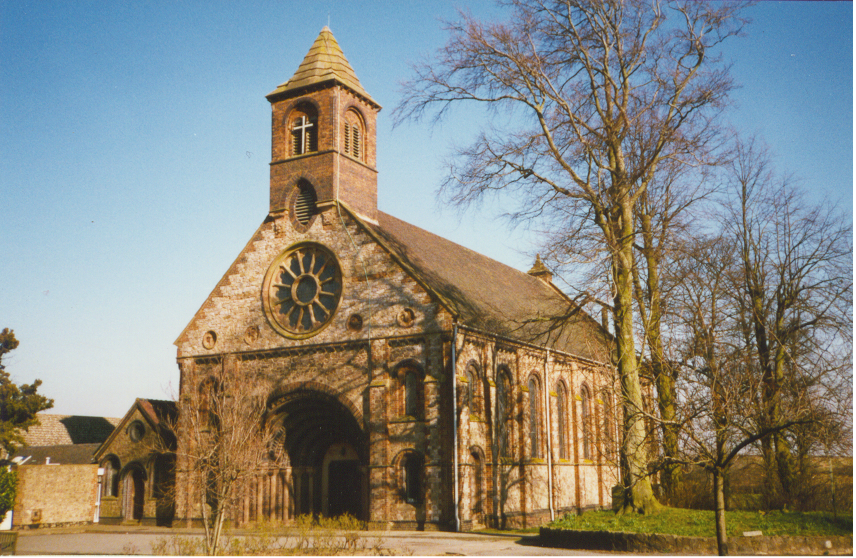 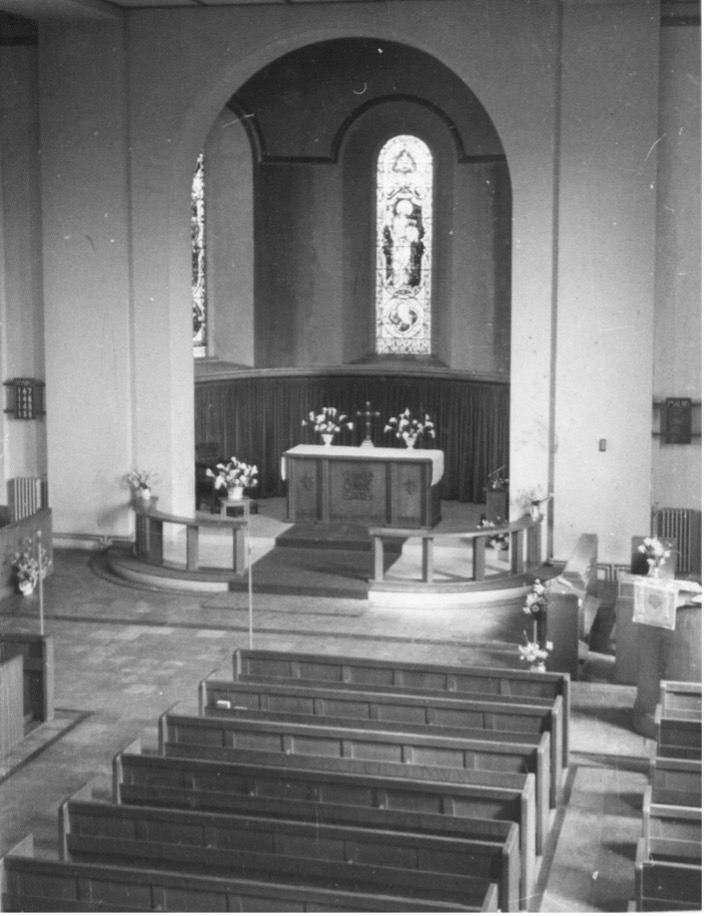 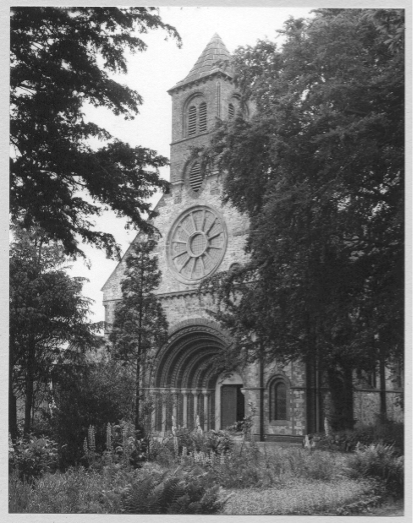 THE PARISH CHURCH OF THE HOLY TRINITY, HARTSHILL

The history of Hartshill Holy Trinity Church actually begins on 30th March 1842 when the Parish of Mancetter Vestry Meeting was held to discuss forming an ecclesiastical Parish of Hartshill out of the Mancetter Parish. The population of Hartshill at that time was about 1000, and already there was a Wesleyan Methodist Church and a Society of Friends Meeting House in the village. There was also the Independent (Congregational) Chapel at Chapel End just down the hill. It was therefore decided that a Parish Church should be built, large enough to seat about 600 people and £650 was immediately raised by the first subscribers. Mr. Richard Jee, who owned the quarry, agreed to donate the stone required.

Plans were made and the work begun, but when the skeleton church was almost complete, in November 1843, part of it fell down - this was attributed to both high winds and defects in the building work. Little progress was made for the next few years due to lack of funds, as an amount of £2500 was required in total. Eventually, thanks to a gift from the Rev. H.E. Lowe who was visiting friends at Atherstone, the building was completed.

The first Holy Communion Service was held there on Sunday 30th April 1848 by the Vicar of Mancetter, as Hartshill's new Vicar, Rev. W.J. Edge had not yet been appointed. The Consecration Service took place at the end of June.

In 1848, of course, the Church looked very different from how we see it today. The path to the Church, which now has a tarmac driveway and car parking spaces, was originally on the north side of the Church not the south. The ground on the south side of the Church was again donated by Mr. Richard Jee. To the north of the Church was an old farmhouse, which was added to and became the Vicarage, built from the same stone as the Church itself. The land around the Vicarage was a gift from the Trustees of Nuneaton Grammar School. The west doorway is one of the largest to be seen on a Parish Church in England and was built in the Norman style, with decorated arches and pillars carved with capitals. Below the great wheel window are four stone roundels with symbols of the Evangelists which today are unfortunately too worn to make out. However, above the window, at the base of the tower, you can still just make out the two quaint heads – one of a gossip with two tongues. The tower has one bell which has not been rung for many years due to the tower itself being unsafe to do so.

Originally the Church was lit by oil lamps suspended from the heavy oak beamed ceiling, which is now hidden by the false ceiling erected ten feet below. There was a small organ situated in the north east corner of the nave (replaced by choir stalls at one time) and a pulpit on the right hand side. Over the years the Church has been enhanced by many generous gifts from its Parishioners, the first being a brass lectern in memory of George and Elizabeth Tippetts in 1893. Stained glass windows were also added – the first being given by the daughters of Joshua Fielding Matthews (Churchwarden) and his wife Maria in 1895. There are two other windows which commemorate Charles Abel (1905) and Catherine Grant Matthews (1907). In 1909 the Vestry was built adjoining the north side of the Church and was used for meetings and other social functions, the architecture blending in very well with the main building. In 1926 electric lighting was introduced.

Major alterations were made in 1938 – 9 and the Church was closed whilst these took place, services being held in the newly built Church Hall. This was when the false ceiling was installed due to complaints about draughts. The gallery was strengthened and the organ moved to the centre of it. The old pulpit was replaced and also the altar rails were replaced by the present oak ones dedicated to the memory of Miss Maud Wilson. An inner porch was added, and the old pews and floor replaced as a gift from Mr. Walter Tremlett. All this restoration work was carried out at a cost of £2000.

On Saturday 29th May 1948 the Centenary Commemoration Service was held by Rev. W.A. Richards. A recording was made of the service, and a box was buried somewhere beneath the floor of the Church by the Vicar and Mr. Kenneth Branston, which contained a 1948 penny, a Church Service Programme, and another unknown document. The Centenary Celebration Funds amounted to £1000!

Over the years many other gifts have been made for the adornment of the Church and in 1965 the whole interior was redecorated by a local contractor having the welfare of the Church at heart. In more recent years a New Vicarage has been built as the Old Vicarage was expensive to maintain and difficult to heat, and was therefore sold off and is now privately owned.

In June 1998 the Church celebrated its 150th Anniversary and exhibitions were held in the Church where so many activities have taken place since it was first built. Summer fetes have been held on the Church lawn and Christmas bazaars in the Hall. Many years ago the dramatic society put on performances and concerts in the Hall. Sunday Schools were held, there was a sewing circle, playgroup, and a baby clinic, Mothers Union meetings and much more. There is currently a well supported Over 50s group and a toddlers group, the Hartshill Windscape Handbell Ringers have their home there and the library is also based in the building. The Church hosts Atherstone Choral Society concerts twice per year as the acoustics are deemed to be very good.

Over the last few years repairs have been made to the organ, the roof and the wheel window above the doorway which is looking really great now thanks to the efforts of the previous incumbent Rev. Laurie Beard. At the moment there is a Parish Project underway to completely rebuild the Church Hall and associated facilities. Last September saw the Church welcoming its first female vicar, Rev. Heather Barnes.

Many thanks to Rose Tyler for letting us use her article
© 2015-2022 Holy Trinity Hartshill
Web Design by Avexi.co.uk